Comedy Night in the House 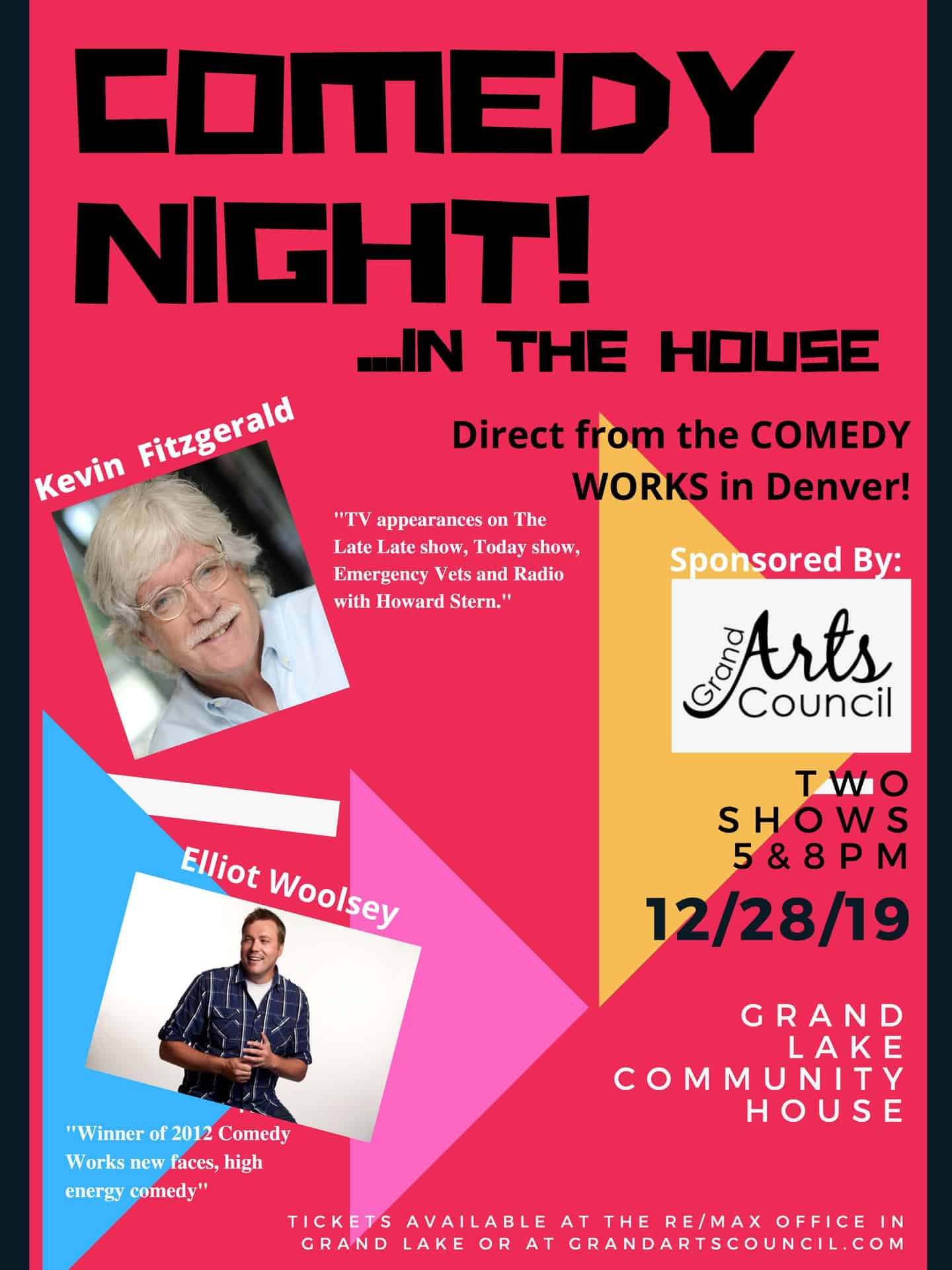 COMEDY NIGHT IN THE HOUSE!
Straight from the Comedy Works in Denver, Kevin Fitzgerald and Elliot Woolsey, are here for one night only on December 28th to make your New Years Weekend Bright! Come laugh with your friends and family and soak up some American Fun!
Our Headliner is Kevin Fitzgerald. Dr. Kevin Fitzgerald has performed stand-up comedy and been a staple of the Denver comedy scene since 1986. Since that time, Kevin has opened for and worked with such diverse and legendary performers as Joan Rivers, Bob Hope, Kevin Nealon, Brian Regan, and Norm McDonald. He is probably best known for his eleven seasons on the popular Animal Planet television series Emergency Vets. Other television appearances include, The Late Late Show with Craig Ferguson, The Maury Povich Show, and The Today Show with Matt Lauer. Radio appearances include, The Howard Stern Show, one of the most popular segments ever of NPR’s Wait Wait Don’t Tell Me, as well as being featured on Paul Harvey’s The Rest of the Story. Dr. Fitzgerald put himself through school bouncing for various rock bands including The Who, Willie Nelson, Parliament Funkadelic, and The Rolling Stones.
Kevin performs to rave reviews at corporate and fundraising events annually and is in high-demand as a host/emcee, comedian, guest speaker, and lecturer at private events, conferences, and veterinary meetings across the country. He believes his unusual dual-career as doctor and comedian offers him a unique perspective on life. Dr. Fitzgerald also believes none of us laugh enough.
Our Opener is Elliot Woolsey. Elliot Woolsey is a larger than life stand-up comedian from Denver, Colo-rado. Towering at an unnatural 6’ 5” and weighing in at barely-healthy 250 pounds, Elliot’s high-energy, commanding stage presence, and relatable material has made him a rising star in the Denver comedy scene. Elliot is the winner of the 2012 Comedy Works new faces contest, and has become a regular at the club, opening for amazing acts like T.J Miller, Todd Glass, and Josh Blue.
Don’t miss this annual event in the Historic Grand Lake Community House in downtown Grand Lake. You can buy tickets at www.grandartsconcil.com or at the RE/MAX office in Grand Lake. Tickets are $25 per person and this show sold out last year so buy your ticket ear-ly. We have two shows: 5 pm show, doors open at 4, and 8 pm show, doors open at 7. Both shows are rated PG13 and alcohol will be served. Both shows will have general seating so come early if you want to be in the front. Water and soda will be available at both shows too. The Grand Arts Council is a non-profit who’s mission it is to promote the arts in Grand County. [email protected] Come celebrate the New Year laughing with us in Grand Lake.