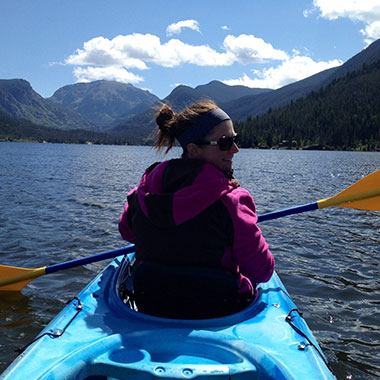 Point Park  From Point Park, on the edge of Grand Lake, you get the best view of Mount Craig, also known as Mount Baldy. (There’s also a gorgeous view of this distinctive 12,007-foot peak from the windows of the Grand Lake Visitor Center, which is located at the intersection of West Portal Road and Highway 34.) Owned jointly by the town of Grand Lake and the U.S. Forest Service, Point Park has handicap access for fishing and boating and is a popular site for picnics and weddings.

Adams Falls On the east side of Grand Lake, less than a mile from the middle of the village, a short walk brings you to Adams Falls, a beautiful waterfall that feeds into Grand Lake.

Colorado River Headwaters The roaring Tonahutu River, which is the headwaters to the mighty Colorado River, is just one of the hundreds of lakes, streams, creeks and waterfalls you can see while you’re in Grand Lake, Colorado or Rocky Mountain National Park.

Farr Pumping Plant Completed in 1951, the Farr Pumping Plant, which is located on the north shore of Lake Granby is the largest trans-mountain diversion project ever built. The plant takes water from Lake Granby, pumps it into Shadow Mountain Lake and then into Grand Lake, via the Granby Pump Canal. From Grand Lake, the water travels to the Eastern slopes of Colorado via Adams Tunnel, eventually reaching the Denver metro area and Front Range.

Cascade Falls The clear waters of Cascade Falls travel for several miles over huge boulders, eventually spilling into Grand Lake. A 3.5 mile hike (one-way) will take you to the heart of the Falls, and along the way, you can look for some of the more than 80 species of wildflowers that dot the region.

Monarch Lake Monarch Lake is located outside the northwestern boundary of the Indian Peaks Wilderness area, only a few miles from Grand Lake and Rocky Mountain National Park. In the early 1900s, Monarch Lake was built to store logs before they were transported to a nearby sawmill via flumes and rivers. Hiking trails loop around the lake, giving you access to virtually all of the pristine shoreline. Monarch Lake is kept at a constant level so that visitors can enjoy non-motorized activities.

Grand Lake Fireworks Grand Lake boasts the largest fireworks display in Colorado on the 4th of July, with gorgeous colors exploding over and reflecting in the lakes. On New Year’s Eve, the spectacle repeats, and if you’ve never seen fireworks mirrored against snowcapped peaks, you’re in for a treat!

Boating and Sailing on Grand Lake Enjoy sailing on Grand Lake, the deepest natural lake in Colorado. There’s also Shadow Mountain Lake and Lake Granby for your favorite water activities. You can rent a boat – a ski boat, pontoon boat, pleasure boat or fishing boat – or bring your own. Slip and dock rentals, as well as mechanical services are available, and there are public boat launches on all three lakes.

Fishing on Grand Lake If fishing is your passion, you’ll find some of the best in Colorado on Grand Lake and Shadow Mountain Lake. Rainbow trout, brown trout, brook trout, Mackinaw and Kokanee are within reach! There are also hundreds of miles of rivers, streams and creeks nearby, some of which offer “Gold Medal” fishing. Ice Fishing Contests

Snowmobiling Known as the “Snowmobile Capital of Colorado,” Grand Lake consistently ranks in the top 10 for snowmobile destinations in the United States. There are 300 miles of trails, (150 of which are groomed) and hundreds of snowy playgrounds for riders of all abilities. You can legally ride down the streets of Grand Lake, and you can access trails from many of Grand Lake’s lodges, inns, hotels, cabins, bed and breakfasts and motels.

One thought on “On the Lake”