Elk, (Cervus canadensis, also known by their Native American name wapiti), are among the largest and most abundant wild animals in Rocky Mountain National Park. As many at 3,200 elk are scattered throughout the park during the summer and fall months, with 600-800 elk spending winter in the park.

These majestic animals can be seen in Rocky Mountain National Park throughout the year, particularly in the Kawuneechee Valley on the west side of the park. During the autumn months, herds of elk congregate by the hundreds into the valley to mate. This is when the elk’s famous bugling can be heard.

A bull elk’s bugle is an incredible, surreal sound; described as a combination of grunts, screeching trumpets, and high-pitched shrieks and shouts (you really have to hear it to believe it). These bugles are meant to communicate to the cow elk in the area, and also meant to alert other bull elk that the bugling bull is ready to defend his cows.

The best chance to witness elk bugling in Rocky Mountain National Park is from mid-September to mid-October, and sometimes even into November. These months also happen to be a wonderful time to visit, with the park’s splendid autumn colors in full effect.

If you get the chance to visit during the elk bugling, remember to be quiet when viewing the elk. Turn off your car’s engine and lights, so as to avoid disturbing the elk during their bugling and mating rituals. Keep a safe distance from the elk, too – if the elk are moving or their attention is diverted, you’re probably too close, and should give them space.

Stay on the roadways during elk bugling season, and pay attention to the posted area closures. Please do not disturb the elk or other wildlife! Remember, don’t use lights or calls to view or attract the elk, as these practices are illegal. 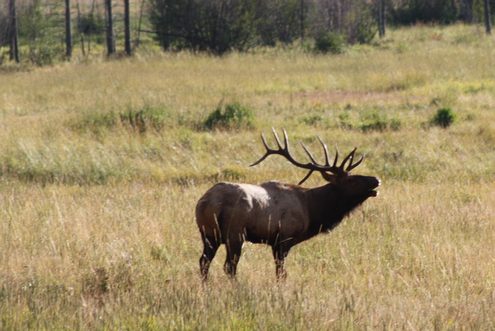